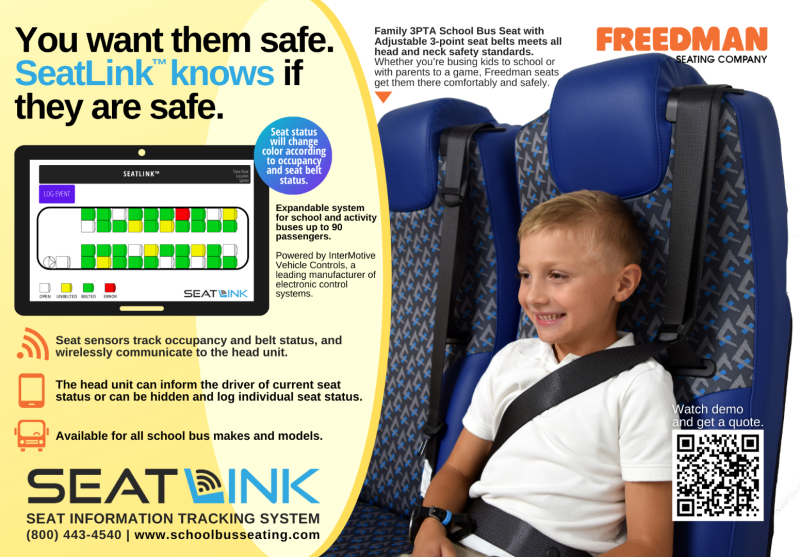 Who’s buckled and who’s not…why guess? SeatLink by Freedman Seating monitors occupancy and seat belt status of school and activity bus passengers. As federal and local regulations continue to advance safety initiatives, including 3-point seat belt usage, SeatLink offers a practical solution. The system records and communicates to the driver when a passenger sits in the seat and buckles the seat belt, or buckles the seat belt before sitting. The wireless system is expandable up to 90 passengers. Don’t look back, look forward with SeatLink.

Tony: All right, guys, I’m really excited to talk to you a little bit more about safety. So we’ve brought on a special guest, Mr. Dan Cohen, President of Freedman Seating. Dan, welcome to the podcast.

Dan: Thanks for having me, Tony. It’s good to be here.

Tony: Absolutely. Dan and I have known each other for Gosh. It’s probably 15 years. We’ve been around a long time, and Dan is a real expert in safety and seating, and he’s seen a lot throughout his career, and I wanted to bring him on and talk a little bit more about some of the safety innovations that Freedman seating is come up with lately. Dan, you want to kind of enlighten our audience on what’s happening lately in this space?

Dan: Absolutely. We decided about two years ago that we wanted to take the offerings that we had, whether it be school bus seating or even commercial bus seats and take it to the next level. And what we did is we developed our newest product, which is called SeatLink. And what that is a seat occupancy monitoring system and a seat belt sensor system. So now customers can know which seats are being sat in. And if the people sitting in those seats are properly buckled.

Tony: So, explain to me. So how does the driver see that when they’re sitting in their seat? What is the visual representation of that?

Dan: Well, we have two ways of setting it up. One way is for the driver to see a floor plan of the bus, so they’ll see a designated seating position for every corresponding seating position in the back of the bus. And then that position changes color depending on the status, it turns yellow. If somebody sits in the seat, it turns green. If the person is buckled properly and then red if there’s an error, so that’s what the driver will see. We can also change the monitor, change the screen so that it’s a larger image so that they don’t see individual seating positions. But it just shows the overall status of the bus. So, meaning if there’s one person who’s not buckled properly, you get a yellow sign. If everybody’s buckled properly, you get the green sign. So, this way, the driver doesn’t have to look at individual things because it depends on the property, depends on the school district or the contractor. They might not necessarily want the driver looking at the screen that much. So, we can tailor the screen displayed to the needs of the customer.

Tony: Really interesting. Yeah. I mean, we’ve seen definitely a larger adoption of three-point safety belts across the country. I know many school districts, some States are mandated, others are not, but it’s still growing, and we’re seeing more and more bus orders. What was kind of the reason you developed this was this feedback from customers? Was this just the driver didn’t want to be the police officer checking everybody’s seatbelt going down the aisle. What was the process? Why did you guys come to this new development?

Dan: Well, it’s a little bit of all the above. When three-point seatbelts became the new thing in school buses, the first thing that all the customers asked us. Well, how do we know if the kids are wearing the seatbelts? What’s the driver supposed to do? Well, what we decided to do was we would give you the answer. Now, you know, if the kids are wearing the seatbelts and we also have part of the system is whether or not the person buckled properly. If somebody tries to fool the system and buckle the seatbelt and then sit down so that they think they’re tricking it, it’ll flash. So they know. But the reason we came up with this is to answer that question, how do we know if the passengers are properly buckled? Well, now you know now. Now what the driver does with that information or what the school district does with that information that’s for them to decide different school districts, contractors or whatever. They’re going to come up with their own policy. We’re just providing them with the information and the tools that they can use to make better informed decisions.

Tony: So how does that look like on the back end. So, if I’ve got two runs or I’m running maybe a multi-tier system, like, 23456 runs a day on a single bus. How’s the reporting on that on the back end? If I’m a transportation director, what’s the visual look like? Does it say, like, hey, this bus had 100% usage. Does it say it had 25%? What if the driver does not enforce what the technology is meant to do? What happens then? Like, how is there accountability that the director maybe can use the teaching tool to let drivers know, hey, you guys got to pay attention to this technology. This is important for safety.

Tony: Wonderful. Well, thank you so much for sharing a little bit today about this kind of new safety innovation. I think we always look at STN to check out new things. And I think Seatlink is really a game changer. And I’m really excited to have you on the podcast to share a little bit about why and what this technology can do to help school districts really utilize their seatbelt technology and really create accountability.

Dan: We’re happy to be a part of this industry, and we’re excited about taking three-point seatbelts, which everybody knows it’s the safest way to transport people on a bus. And we’re really excited to take it to the next level of enforcement and just information and knowing what’s going on in the bus.

Tony: Yeah. Recent headlines, there’s been some bus crashes. I know there was a big one in Pennsylvania where there were fatalities and it’s being buckled up in a time like that, you don’t need it until you need it. And I think there’s a lot of value in creating good behaviors. And if that means kids are buckling up, drivers are buckling up. Everybody’s participating. That can only be a good thing for safety.

Dan: Yeah. One additional feature that we do have on the seat link. As I mentioned earlier, you can change the screen from being the floor plan to just a large image. One thought is that the monitor will be positioned not necessarily for the driver to be looking at, but for all the passengers in the back of the bus to look at. So, everybody can see if it’s yellow or green, then peer pressure will maybe force people to do the right thing. That all the kids. All the riders will say, hey, somebody’s not buckled properly, and they can look around at their friends and say, Listen, let’s get buckled up. It’s not safe if you’re not buckled properly. So, there’s a lot of different ways to configure this. It just depends on how the school district, or the contractor want to put it in.

Tony: So, Dan, if anybody’s interested in learning more about SeatLink, how do they get in touch with you?

Dan: Well, the easiest way is to go to our website, which is freedmanseating.com . You can find the sales representative to your area, or they can also just fill out a general request and send it in from the website.

Tony: Hey, thanks, Dan, for all that great information.